Here are highlights from the
2105 - 12th Kid Interviews
with our TCS announcer, Ms. Lloyd.
Take it away...

PJ - Kicked-off our 12th Man Interviews this year, thanks for getting us rolling! His favorite number is #6, and his family is hosting a Super Bowl party this year. They are serving cheese and pepperoni pizza, with coke and chocolate for dessert. PJ's going to wear his Seahawk's T-shirt, but you don't have to wear anything special to attend. A lot of people are coming, adults and kids. Go Seahawks!!!

Max - He loves #5. Not only is he planning to wear his Seahawk's shirt, but also his green and blue ski hat (pompom-style?). As an aside, he did want me to know that he likes going to the Huskies' basketball games too. At his Super Bowl party, he too will be serving pepperoni pizza with coke and chocolate - yeah for the big game!

Peter - His favorite player is the same as the jersey he was wearing today - Russell Wilson #3! He's having a Super Bowl party at his house with his mom, dad, and grandma. He'd like to have spaghetti with extra Bolognese meat sauce - he really likes the sauce. His special message for the Seahawks was "Go Russell Wilson!"


Henry - He doesn't have a favorite, but he too likes #3 Russell Wilson because he wins! He's having a Super Bowl party at his house, and he'd like his friends Milo and Peter to join him. He's going to wear the green shirt he has on today. He'll be serving strawberry-flavored fruit sauces to eat, water to drink, and for a treat, Christmas colored M&Ms (his big sister has a candy cane full of M&Ms!).

Milo - Russell Wilson #3 is his favorite Seahawk because he wins big games! He'd like to go over to Henry's house to watch the game; along with his whole family, he hopes that Aida will be there too. He's going to wear his blue with green stripes Addias jacket to the party, it's super sporty looking. There will be vanilla cake and chocolate chips to eat. Between quarters he wants to play some video games. Go Hawks!!!

Cooper - His favorite player is Roxy - he plays for the Seahawk blue team and he likes kicking the ball. Roxy is good at baseball and soccer too, his favorite number is "0" "2" "5" or "10," it just depends. At his party, there will be popcorn, chips, chocolate covered raisins, and chocolate ice cream. He is going to wear a blue beaded necklace, and during breaks in the action, he'll work on his ABCs.  Whoohoo Hawks! Go Hawks!

Lyla - Her favorite player is Buzz Lightyear, his number is "15" "8" "7," and his uniform is green with white. She isn't going to a Super Bowl party, but will stay home and eat chocolate chips, granola bars, cereal, and chocolate M&Ms. Everyone will be coming over to visit, but she's especially excited to see her cousins. She's going to wear a belted dress, it's pink with flowers.
Posted by Unknown at 6:49 PM 1 comment:

If you're following the Super Bowl, you know it's "media day" down in
Phoenix, AZ. So TCS announcers are dusting off their microphones
to kick off the 2015 12th Kid Interviews!

Here's a review of last year's insights on when the Hawks pasted the Broncos:

With their meteoric win, TCS kids couldn’t help but get engrossed in the Super Bowl celebrations. We hosted 12th Kid Interviews, and our commentators, Teacher Maureen and Ms. Tierney, gleaned oodles about our local fans and their Seahawk spirit. 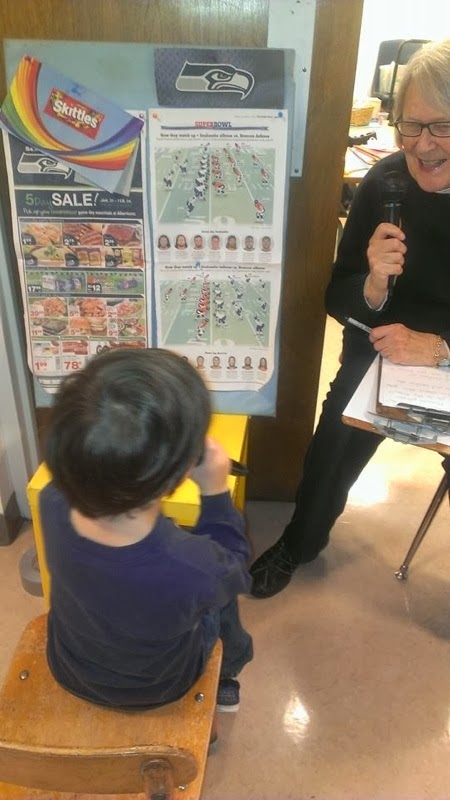 Here are some play-by-play highlights:


Calix – His favorite player is Richard Sherman #25, he attended a party at Rowan’s house. They ate donuts and had fun!

Adelyn – Her favorite player is Marshawn Lynch #24, and she was quite fond of the blue and green Seahawk balloons.

Daisy – She is a real Seahawk fan and her favorite player is #24 M. Lynch. Her Super Bowl party had special decorations and lots of shouting! Chicken wings and red Skittles were served.

Roslyn – She wore her blue and green dress to the Seahawk party, she too likes #24 M. Lynch. She enjoyed her favorite candies, mint chocolates and purple Skittles. Her dad was in NYC watching the game, and needed to be picked up from the airport at 12 o’clock sharp!

Max – He’s a big Seahawk fan, and he loves #24 M. Lynch whose job is to run with the football. At the party there were green and blue balloons along with a rainbow of Skittles. Because he’s such a nice guy, Max wore an orange, blue, and white shirt just to honor the opponent.

Kai – He's a true Jets fan (like his dad), but got into the spirit of the Seahawks. His favorite player is #41 Byron Maxwell. The Super Bowl party was great fun, he wore one of his favorite t-shirts and didn’t eat anything besides Skittles.

Matilda – She is a long-time Seahawk fan, her favorite player is #3 Russell Long (I think she meant to say “Wilson,” regardless, he can throw a long ball!).  She attended a Super Bowl party at her Auntie’s house, where everyone attending wore special t-shirts. She enjoys eating potato chips, jelly beans, and Skittles.

Connor -  He likes the Seahawks, especially #3 R. Wilson. He wore a big coat to the party. Lexie and Aida were at the party, and everyone was eating Skittles.

Henry – You gotta love him; he’s a Bronco fan, and his favorite player #00 catches and runs with the ball (because that’s his job)! He wore his soccer jersey (#2) to the Super Bowl party and ate Skittles the whole time. He wished he could have attended the parade.

Sophia – She’s a big Seahawk fan and her favorite player is #7 – not sure who that is – but his job is to catch the ball and he’s good! She put on her pretty, pink, summer skirt with the unicorn for the game. At the party she ate hotdogs and a big, chocolate bunny. She didn’t attend the parade, but there was a football to play with at the party.

Emily – Her favorite player is #12, and she is a Seahawk lover! She wore a special jersey and ate lots of Skittles at the party, but missed the parade :(

AJ – As a true Seahawk fan his favorite player is #1 – he’s the best – and that’s how they won! He wore his blue and green Seahawk jersey and ate hot dogs and Skittles. He’s not sure about the parade, but would like to go.

Tate – He’s a long-time Seahawk lover, and #81 Golden Tate is his favorite player – they do share the same name!! He wore his Golden Tate jersey to the Super Bowl party, and school on Monday, and he ate lots of Skittles, yum!

Zadie – She too likes #81 G. Tate and she’s a big Seahawk fan! She wore a special Seahawk-patterned bracelet and ate delicious candy at the party.

Ms. Tierney – She likes the way #3 R. Wilson can throw the ball. At her Super Bowl party they ate fried chicken and candy. She missed the parade because she was teaching yoga at TCS.