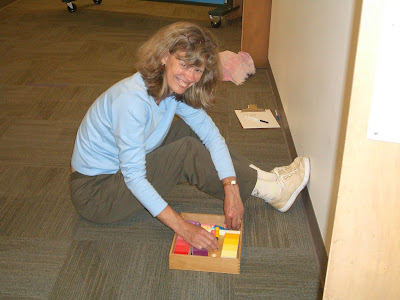 Every Wednesday our school is blessed with the quiet and focused presence of Mrs. (Bev) Allen, a Montessori "guru" of sorts. She shares her time with our 3 and 4 year-old classrooms. The picture above is very accurate in that it shows the environment you are most likely to find Mrs. Allen in: on the floor, with her Montessori "tools" (or games, as the kids know them), and a clipboard not far away! Very quietly, Mrs. Allen will take one, or maybe two children at a time out into the hall or to another room, and introduce them to a Montessori tool. The one above is a tool that works with colors, challenging the children to see the subtle differences between the color shades and put them in order of light to dark, for example. The children really look forward to this special, focused time, and using the very wonderful Montessori tools. (Many of these Montessori products are just fabulous to touch! Most are made of wood, and simply feel good in your hands!) They also look forward to all the wonderful games Mrs. Allen challenges them to play. As our friend Nikola so astutely pointed out today when he had his turn with Mrs. Allen, "I don't have these games at my house!" We hope you will say a friendly "hi" to Mrs. Allen when you see her! She is an important part of the magic we call "The Children's School Experience."
Posted by The Childrens School at 11:06 AM No comments:

Is there a Doctor in the House?? 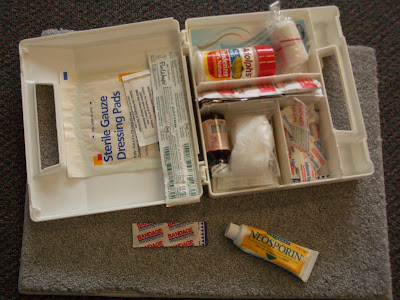 Sitting in Lunch Bunch one day with some of our 3 and 4 year old friends, Mrs. Coleman sat on the rug and announced off-handedly that she had an owie. Of course, the response from several of these friends was, "Where??" and "Can I see? Can I see?" Now this was not a serious owie, and no blood was visible, but it was a very irritating paper cut that had been bothering Mrs. Coleman on and off all morning. She chose to share this small fact out loud, with the added invitation of "Would you guys like to help me fix it?"

Suddenly, it was Dr.'s Joe, Chae, Whit and Ailbhe to the rescue!!

The first problem our team of doctors had to overcome was locating the medical kit (pictured above). Here Dr. Whit stepped to the forefront, taking very few verbal clues from Mrs. Coleman and quickly locatiing and extracting the medical kit from its "home." Having procured the kit, the team quickly got it open to admire its contents. Dr. Ailbhe was quickly in charge of the bandaid, and set to releasing it from its packaging.

As Dr. Ailbhe was working on the bandaid, Mrs. Coleman asked if maybe this owie wasn't just serious enough to require the use of Neosporin, to which Dr. Joe (Dale) jumped in with "I can do that!!" and before you know it, had just the right amount of ointment carefully squeezed from the tube and deposited on Mrs. Coleman's cut!

Bandaid in place - and a Spiderman bandaid at that!! - Dr. Chae quietly asked "What can I be in charge of?" So we quickly went through all the steps again, and the "who had done what" list. Finding the kit? Check. (Dr. Whit); finding and subsequently putting on the bandaid? Check. (Dr. Alva); finding and putting on the ointment? Check. (Dr. Joe). Mrs. Coleman quickly identified that there had been no healing kiss placed on the injured digit, and asked Dr. Chae if she could be in charge of this particular step. Dr. Chae was kind enough to place the final, and maybe most important, medicinal treatment on the injury!

I think it's important to add here, before signing off, that no help whatsoever (other than the verbal clues mentioned above) was given to this team of friends. The help they gave to Mrs. Coleman was all their own doing. They are so capable when given the opportunities to show us what they know!! And when our friends were given this opportunity to "help," not once was there any arguement amongst our friends as to who was going to do what. There was instead a great example of cooperation.

Mrs. Coleman is extremely happy to report that the aforementioned papercut has healed stupendously - you can't even see where it was!! Thank you to this great team of friends!!

Posted by The Childrens School at 10:40 AM No comments: 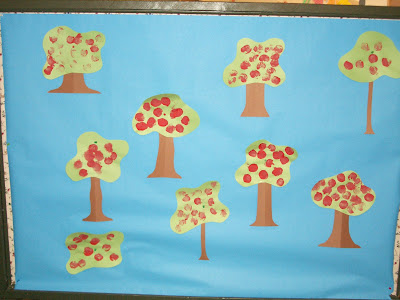 Our Pre-K friends came to school with a great deal of enthusiam, and"Knowledge!!" They are all eager to help out, and show us what they know, and we here at The Children's School are all excited to let them do just that!! In Ms. Tierney's Pre-K classroom, working with apples and sunflowers has produced some extraordinary art for us all to enjoy! Aren't these beautiful!! 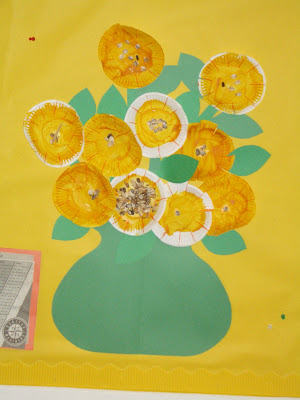 Posted by The Childrens School at 10:25 AM No comments:

The Children's School wants to introduce something new and exciting for our parents and caregivers!!

Friendly Chats with Mrs. Banks!!
(aka Lunch Bunch for Grown-ups)

The Children's School wants to offer parents and caregivers an opportunity to get together with Mrs. Banks and other staff members to discuss a variety of what we trust will be useful topics.

Our first topic will be “Getting Ready for Kindergarten!” Our target date for this first session is late October or early November – giving us all a chance to settle into our new routines. It will be offered during our normal Lunch Bunch Program hour, starting at approximately 11:45 a.m. We will be inviting everyone who participates to bring a bag lunch. We are finalizing our plans for location, working to find a space that will be welcoming to adults in conversation, and also welcoming younger siblings who may also need a place to hang out during this hour.

We hope you find this new opportunity to be in conversation with Children’s School Staff Members as exciting as we do! To get started, keep an eye on our blog, and your child’s Take Home Box for our first announced “Chat Date.” We have several ideas for discussion topics, but we are also very interested in what it is that YOU want to discuss with each other and our very talented and knowledgeable staff members.

(Interested already?? Great! Drop a note or an email to Lisa Coleman at beanrhit@comcast.net. Knowing who’s interested will help us tremendously in our planning process. ©
Posted by Lisa Coleman at 2:07 PM No comments:

We're Off To A Great Start!!

What a fabulous week we are having! We are singing and playing and learning! We are creating, writing, and cooperating!! Isn't it great to be back to school!
So on behalf of your Children's School staff, let me once more say "Thank You" for trusting us with your lovely, spirited, intelligent, caring, and always endearing children!
Oh! And did I mention how much we appreciate you getting back to us with your emergency packet information, profile sheets, contact information and immunizations (if you didn't get a chance to give those to us in the spring)! It's so nice to get paperwork out of the way!
Posted by Lisa Coleman at 1:57 PM No comments:

Do you have any friends looking for a last-minute preschool placement for their child? Perhaps you have a new neighbor who is looking for a great place for their child to start preschool and make some new friends?! Please let these folks (and others) know that The Children's School has multiple openings in our morning 3 & 4 year old classrooms, and in our afternoon Pre-K classrooms. It would be wonderful to add as many as 3 or 4 more children to each of these classrooms, so please help us spread the word! --Thank You.

Posted by Lisa Coleman at 5:41 PM No comments:

What's Roofing Got To Do With It??

Our building is undergoing another structural improvement - a new roof!! This project started in late August, and is scheduled to last at least 3 months. You may have already "experienced" some of the impact this project has on The Children's School when you came to visit for your Open House. But just in case you didn't, let's take a minute and review some of the different ways this could impact your experience here at school:

Well, that should do it!! This should be over before we know it!!

Posted by Lisa Coleman at 10:50 AM No comments:

Keep an Eye on our Blog!!

Check out the blog regularly! We are adding stuff all the time!!
There's an updated calendar for your convenience to check on dates for open houses, Lunch Bunch start date, teachers' meetings, school breaks, and SPS (Seattle Public School calendar adjustments).
We have started to add resource pages. Our first is one on good practices for saying goodbye to your preschooler. Look here for other useful information!
Posted by Lisa Coleman at 10:40 PM No comments:

By now all of our 2007-08 families should have received a packet of information sent out in August. In that packet, each child enrolled in The Children's School starting Sept. 2007 would have received an invitation to their class' Open House. Please be aware that only 1/2 the class meets at a time. Check your invitation for your specific time! Note: There is NO PRE-3 OPEN HOUSE UNTIL THE WEEK OF Sept. 10th!
Here is the Schedue: