In addition to our holiday families, we are working with our friend Brigid Hagen, who is a good friend and past teacher here at The Children’s School. Currently Brigid is the Financial Administrator of the Frederic Ozaman House, which provides housing for “grandpas” who have struggled, and who also deserve a little love at Christmas. Brigid’s hope for these grandpas is that each of them simply receive a $5 gift card as a small Christmas gift. We want to help with this goal. There are 56 grandpas who live at the Ozaman House. There is a display and “voting” board in the Brick Wall Hallway. It looks like this: 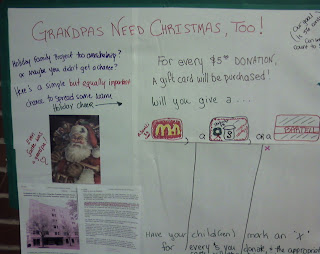 If you would like to donate a gift card (or 2, or 3), have your child choose which gift card(s) your donation would purchase, and drop a check (or cash) in our blue basket. For more information on the Frederic Ozaman House, please use this link: http://www.ccsww.org/site/News2?page=NewsArticle&id=8806&news_iv_ctrl=-1&printer_friendly=1

See you at school!
Posted by Miss Tierney at 4:27 PM No comments:

It's That Time of Year!

You may have noticed our holiday preparations here at TCS. Last week the Pre-K built houses out of graham crackers (much easier for us that gingerbread!) 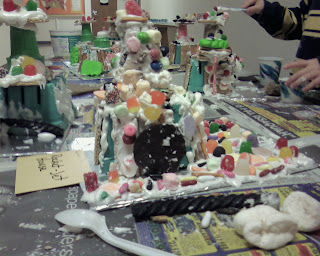 For a little while we had a whole village in the hallway! Thanks to all who participated and donated. The morning classes have made some beautiful nametags. They're all practicing writing their names, what a good job they've done!

Keep your eyes peeled. There's always something new to be found.

See you at school!
Posted by Miss Tierney at 4:18 PM No comments:

Goats and Trolls and Bridges oh my!

This year when we returned after summer we were excited to find bells had been attached to the climber outside!
One is a cow bell and the others are a little smaller. Imaginations get active when we are outside and suddenly one day we were imagining that the goats were coming down from the high meadows in search of green grass. We spent a month or so just mentioning as the bells ring that there must be goats coming down from the meadows. "I hear the goats! " was a common exclamation. Many classrooms participated at this level too.
Then one day, without even reading the story, we had volunteers for playing the parts!
Who would like to be a goat? Bee, Karsten, Paige! What about a troll? "Happy to help" Wyatt said. Holly too.
A little later we played the story tape and practiced inside. This time our biggest goats were Julian, Karsten, Charlotte, Kevin, Lewis. Our middle-sized goat was Max and the littlest were Carly, Bee and Paige. Kalea and Jacob were the audience, a much appreciated part of the whole performance! 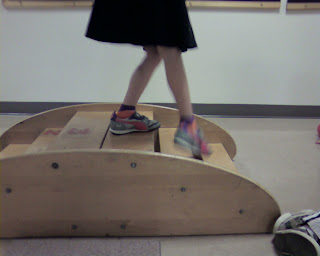 What a fun story! And the pre-k kids are still playing this game whenever they can. Thanks, Teacher Cinda!
Posted by Miss Tierney at 6:02 AM No comments: